Chief Minister Tarun Gogoi downplayed simmering dissidence with the Congress legislative body. Talking to reporters in the sidelines of a function in Guwahati on Thursday, Gogoi said that he won’t give any importance to whatever the media was talking of.

Gogoi reacted so amid reports of preparation of a section of legislatures to move the high command demanding his replacement.

10 Mar 2016 - 10:07pm | Shajid Khan
With just a couple of days left for the upcoming assembly elections in Assam, the ticket aspirants of Congress, BJP have started campaigning by pasting banners, hoardings and by organizing meetings... 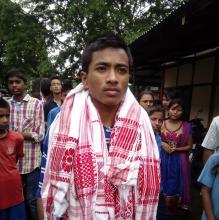