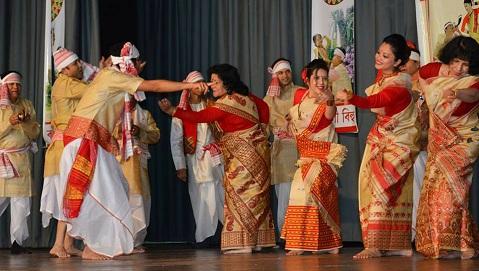 “Beating my Dhol during the performance of Husori was an extremely special moment – especially knowing I was on stage with four generations of Assamese,” said Dr Khogeswar Lahon, one of the first wave of Assamese to move to the United Kingdom in the 1960s.

Dr Lahon, the president of the London Bihu Committee, was among those who performed in a momentous celebration of Rongali Bihu last weekend. It featured the first Husori in Britain involving four generations.

It was equally special for nine-year-old Juhaim Rasul Choudhury, the youngest Husori participant on Saturday 26 April at Campion School in Hornchurch, Essex. "At first I felt a tiny bit of stage fright but after a couple of minutes I got the hang of it,” he explained. “I felt really excited and confident and I didn’t want my Husori programme to ever end.”

Juhaim’s father Zaved Choudhury masterminded the special Husori. “As one of the cultural secretaries, I thought that the best way to highlight the presence of the growing global Assamese community in the UK was to involve the present four different generations of our community with whom I interact,” he said.

“This was also a good opportunity to pass on our rich cultural heritage to the upcoming new Assamese generations though we are on the other side of the globe.” 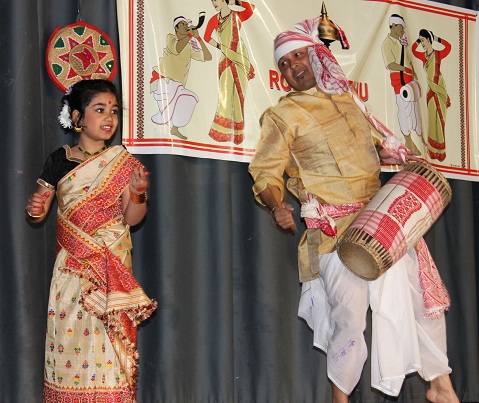 Newlyweds Tashmia Farhat and Madhusmita Gogoi, who moved to the UK two years ago, and Sanjay Sikdar and Rishi Kakati, second generation Assamese who were born in Britain, also took part.

Kakati said: “My parents and I very much enjoyed being part of the first four-generation Husori. It was an honour to be a part of it and kick off the show with a bit of energy and verve.”

Reflecting on an enjoyable and energetic Bihu celebration, Kakati added: “Everyone had such fun during the Bihu Olympics and the group dancing was contagious and led to a great, convivial atmosphere permeating the entire event.”

The 27th consecutive London Bihu maintained its tradition of “sports”, including musical chairs for both the children and adults, the cultural show and Bihu Bhoj.

Committee member Bornali Bahia was impressed by the number of people attending the event for the first time. “It is clear from the number of kids and babies that it really is a lovely, fun day out for all the family,” she said.

Summing up the mood of celebration, Dr Neera Borkakoti, treasurer for the London Bihu Committee, said: “It really felt that we captured the true spirit of Bihu - everyone young and old getting together to sing, dance and rejoice.”

28 Feb 2009 - 3:57am | editor
After lots of hurdles and hi-cups, a couple of married lovers got fresh lease of life on Thursday. Courtesy the Gauahti High Court.A division bench of Gauhati High Court comprising Chief Justice J...

2 Jun 2012 - 5:47am | editor
Three poachers had a narrow escape when they were locked at an encounter with forest guards in Pobitora wild life sanctuary on Friday.The shootout took place between forest guards and poachers from...