Former minister Prabin Gogoi is critically ailing. The former minister in the Prafulla Kumar Mahanta’s cabinet has been suffering from cancer for the last couple of years.

His condition suddenly deteriorated on Thursday at the Kushal Konwar Civil Hospital in Golaghat where he has been undergoing treatment. 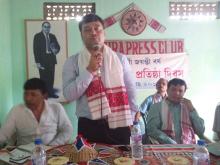 27 Feb 2014 - 11:32am | AT News
At least ten people sustained injury, three of them seriously at a group clash in Udalguri district on Thursday.The incident took place in Kolaigaon where a section of people assaulted two persons...

29 Oct 2011 - 4:07am | Ritupallab Saikia
Triggering panic among passengers of the Ledo-Guwahati Inter-city Express, Furkating GRP during a routine checking recovered a bag containing explosive that arrived at the Furkating Railway Station...