Tension starts escalating in Baska a day before the Lok Sabha polling on Thursday.

Several persons sustained injury when policemen guarding a polling booth in Bagulamari area resorted to firing to disperse a group of miscreants who were trying to capture the booth.

The incident took place at 7 in the evening when a group of armed miscreants were spotted trying to sneak into the booth.

Policemen who were standing at the booth premises tried to prevent them from entering into it where the shoot out took place. The injury of the polling officials policemen was minor.

23 Jul 2016 - 5:47pm | Sanjoy K Kakati
Many local organizations in Raha on Saturday have reiterated the demand to set up the proposed AIIMS in the area. Attending a huge public meeting in Raha, the speakers representing various local... 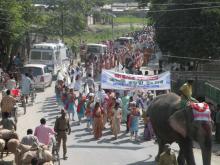 2 Nov 2011 - 2:36am | Jayanta Kumar Das
The silver jubilee celebration of Kalaigaon College concluded on October 30. A grand cultural procession,inaugurated by Mitha Ram Basumatari,EM,BTC marked the beginning of the concluding session...