Irrespective of caste, creed and communities eyes to the holding of free and fair election for No. 5 Kokrajhar Lok Sabha constituency in the third and final phase in the state scheduled on Thursday.

S K Ahmed Ali, resident of Kathalguri Jaypur in Kokrajhar district said that he had already cast two times vote in parliamentary election, but he never get to cast his democratic vote during election as somebody cast his vote by someone else.

‘I think this time no rigging will happen and I feel it is like election and election will be free and fair. I wish I will cast the vote myself for suitable candidate’, he said.

M H Narzary in Kokrajhar town said that this time election will be held free and smooth function as peoples are seeing in healthy situation in the constituency. He said this time Kokrajhar constituency is witnessed multi-cornered contest among society, hence people can expect more healthy and peaceful election in the region. 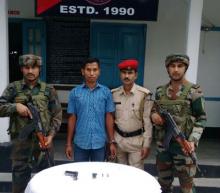 16 Oct 2014 - 9:49pm | AT News
Union Minister Sarbananda Sonowal blamed large scale influx for the entry of al-Qaeda and Jihadi militants in Assam for the last ten years.Talking to reporters in the sidelines of a function in...