Dhubri parliamentary constituency is all set to go to the Lok Sabha polls on Thursday.

The general polls this time in Dhubri will decide on the fate of 15 candidates after voting by 16,22, 325 electorates in 1940 polling booths.

Guarded by security forces, polling officials have already arrived the booths with necessary materials on Wednesday where they are set to begin voting from 7 in the morning. Pollings are set to end by 5 in the evening.

The minority-dominated constituency has 15 candidates in the fray. But the contest is expected to be between AIUDF Chief and sitting MP Badruddin Ajmal, Congress candidate Wazed Ali Choudhury and BJP's Debamoy Sanyal. 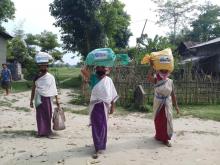 31 Jul 2007 - 5:32pm | editor
Guwahati: Ceasefire with National Socialist Council of Nagaland has been extended for an indefinite period. A meeting was held at Circuit House, Dimapur, the commercial hub of Nagaland on Tuesday...