Chennai police have arrested two youths from Assam on recovering a huge amount of rupees in cash from their possession.

Identified as Zakir Hussain and Anwar, the duo were caught during a vehicle checking by the election commission’s flying squad on Tuesday afternoon.

Police claimed to have found a bag containing Rs 1.84 lakh which thy allegedly stole from the owner of a lodge in Royapettah where he Zakir worked.

Hussain is believed to have stolen the bag left the hotel by an autorickshaw where he later picked up his fiend Anwar at Periamet.

The duo were held were walking to and fro in the city amid sharp vigilance of the Election Commission's flying squad which  stopped the vehicle for checking around in the evening.

Police have registered a cash based on a complaint from the lodge owner.

16 Oct 2007 - 4:46am | editor
The world observes October 16 as World Food Day. Once again another day of rhetorics to rue about the dismal food scenario (especially among the developing nations); to reiterate our noble intentions... 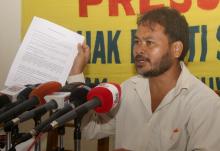