2 killed in clash over land dispute

Two persons were killed and five others have been critically injured when two groups of people clashed with each other in Nagaon district on Monday.

The incident took place in Bokulguri area where both the groups clashed over a plot of land. The situation was brought under control after policemen had arrived in the spot.

Two persons died on the spot while the five critically injured persons including two women are undergoing treatment at Jamunamukh Hospital. Police investigation is going on. 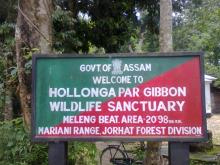 3 Jun 2012 - 12:58pm | Bonani Gogoi
There still exists a place in Mariani, Assam, a quite unknown to the world. Its known as the Hoollongapar Gibbon Sanctuary, formerly called Gibbon Wildlife Sanctuary or Hollongapar Reserve Forest....