Polling by and large peaceful

Brisk polling is going on in Jorhat, Lakhimpur, Tezpur, Dibrugarh and Koliabor where 64,10,883 voters are exercising their franchise to decide on the fate 51 candidate in the first phase of Lok Sabha polls on Monday.

Heavily guarded by 321 companies of security forces apart from 1221 para military forces, the polling is underway in 8,588 booths. The authorities have deployed 38,463 officials apart from 743 micro observers.

Barring a string of EVM anomalies, the polling is by and large peaceful which will continue till 4 in the afternoon. 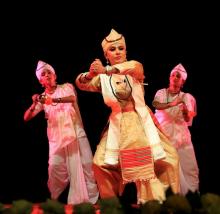 12 Dec 2017 - 7:37am | Prantik Deka
Recently, the audience at the Srimanta Sankardev Kalakshetra’s Sri Sri Madhabdev International Auditorium were treated to an evening of Sattriya Oja pali - 'Sampurna Apaal Poda Gowa', which was...

2 Mar 2014 - 9:36pm | AT News
Finally Chief minister Tarun Gogoi broke his silence on the arrest of Akhil Gogoi and five of his associates.Talking to reporters in Dibrugarh on Sunday, Gogoi said that the KMSS president violated...