21 Oct 2014 - 9:44am | Rituraj Phukan
A group of nature lovers rescued an elephant calf from Mezigaon in Parkup along the Nagaon-Karbi Anglong border on Monday night much to the delight of a section of local residents.Acting on... 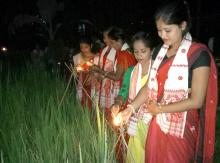