10 Apr 2020 - 8:59am | AT News
Silchar: The state registered the loss of it's first COVID19 patient when Faizul Islam Borbhuyan passed away at the Silchar Medical College Hospital on Friday. Borbhuyan, the 28th patient COVID 19... 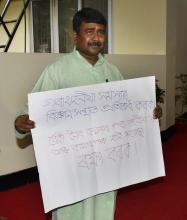 25 Jul 2016 - 1:15pm | AT News
The Opposition launched scathing attack on the BJP-led government in Assam on Monday alleging the brimful misery of the flood-hit people. Congress and AUIDF members alleged on the floor that many...