Four hardcrore ULFA cadres were killed in Sonari during a joint operation by Army and Sivasagar police on late Friday night. According to information, Army’s 316 Field regiment jawans and the Sivasagar police conducted a massive raid in Naphuk Naharani gaon under Sonari police station and found out these ULFA cadres in a house. These four cadres died on the spot during the operation while the police suspected that two or three more cadres have escaped the operation. Two of these militants have been identified to be Phatik Handique and Ranju Hazarika. The others have yet to be identified. The police have recovered a AK-47 rifle, 4 grenades, one 9mm pistol some ammunitions and mobile handsets.

8 Sep 2014 - 10:10am | AT News
The Karimganj girls suicide case takes new turn with the family members lodging murder complaints before police a day after post mortem report suggested neither rape nor murder. The family of one...

2 Jul 2015 - 10:49pm | AT News
Three girls met watery grave when the boat ferrying them capsized on the river Burhi Dihing at Tengakhat on Thursday.The tragic incident took place in the evening when the boat was ferrying 5 people... 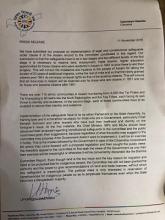