BJP is likely to avoid Koliabor constituency in the upcoming Lok Sabha polls.

State party leadership think it necessary to check further division of non Congress votes in the crucial seat where chief minister Tarun Gogoi’s son is in the fray.

Central leadership prepared a panel of three contenders. But the state leadership on Friday suggested the high command not to field any candidate where AGP candidate Dr Arun Sarma is set to extract the mileage.

22 Jul 2015 - 3:59pm | AT News
Former GMDA minister Dr Himanta Biswa Sarma threatened to take legal action against a section media for dragging his name to the Luis Berge scam.Talking to reporters at the Rajiv Bhawan premises on... 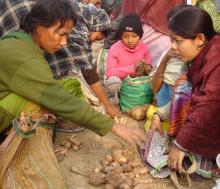 19 Jan 2008 - 10:13am | Dibya J Borthakur
You cann't believe until you visit the Mela ground that in this Hi-tech age the barter syestem of trade is still prevalent in Jonbeel Mela - a community festival of the Tiwa tribe of Assam.The Mela...