Toppo to contest from Tezpur

Its official. Joseph Toppo will contest from Tezpur in the upcoming Lok Sabha polls.

The decision was finalized on Friday a day after the sitting MP sent his resignation to the party leadership.

Senior party leaders formally announced his name after Toppo arrived in the party headquarters to attend the general council meeting on Friday. The party on Thursday rejected his resignation. 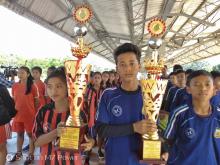 7 Mar 2017 - 9:19am | Suvansu Bora
The Golaghat district administration steps up initiatives to provide the inferno hit people in Rangoliting relief materials who have been taking shelter at a local school.According yo the district...