Award winning prolific writer Arundhoti Roy also joined the dharna organized by KMSS student wing in protest against the arrest of Gogoi in connection with a  self immolation case of a KMSS activist in Dispur on February 24.

Waiting for date with Dutta 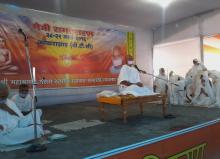 29 Mar 2016 - 8:27pm | AT Kokrajhar Bureau
Shantidoot Acharya Shri Mahashraman, chief of Jainism has clarion called of peace and unity among society is the only to keep sustainable of development and people’s welfare in the world. Acharya...