U N Brahma Soldier of Humanity Award to Ramesh Bharadwaj

There are few individuals who work not only for themselves but for the community and nation and one such person is Bodofa Upendra Nath Brahma. A Soldier sacrifices his life nor for his personal gain but because of his profound love for the motherland. He never bothers for name and fame. The Soldier would also be implied to the heroes, who fight for the cause of human beings without gun and violence. Upendra Nath Brahma was also a soldier fighting for human rights, liberty, equality and fraternity of every person of this earth.

‘Soldier of Humanity’ has been named after him to encourage individuals who have rendered services for the community like a true soldier as UN Brahma was a strong campaigner of the Principles of liberty, equality and fraternity. UNB Soldier of Humanity Award consists of a sum of Rs. 100,000.00, a memento and a citation and instituted by UN Brahma Trust. The recipient of the award for the year 2020 which is 17th since it started in 2004 is Professor Ramesh Chandra Bharadwaj from Delhi University which has been conferred on 10th January at ITA Machkhowa , Guwahati.

Prof Ramesh Bharadwaj in his speech mentioned his experience with different Bodo leaders who took part in movements in democratic way. Praising the activities of All Bodo Students Union and Bodo Sahitya Sabha, he mentioned that one becomes disciplined when they are associated with these organisations. 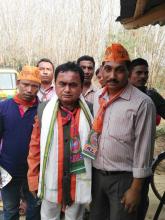 Unsung Heroes Amongst Us

16 Jun 2019 - 3:48pm | Taw Nana
My sisters and I are like friends. Some days ago, I was waiting for my sister, outside a shop nearby the roadside (she was late as usual). It was noon. Felt like the Sun god was overly generous with...