28 May 2015 - 6:12pm | Hantigiri Narzary
Two persons of a family were murdered by unknown miscreants at Bumki village under Salakati police out post late Wednesday night in Kokrajhar district.According to source,miscreants murdered a mother...

14 Oct 2012 - 4:22am | editor
One more rhinoceros was killed by poachers in the Kaziranga National Park on Saturday. The poaching took place at Sohola camp in Agoratoli just before the forest guards engaged in a gun battle... 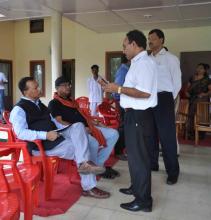