KOKRAJHAR: Airports Authority of India, in its continuous endeavour to link under-served and un-served airports through Regional Connectivity Scheme routes has started its regular flight services at Rupsi Airport in Assam.

The first commercial flight of Flybig airline landed today at 12.07 pm marking the beginning of a new era at Rupsi, in Kokrajhar district of Assam and adjoining area.

As a gesture of welcome, water cannon salute was accorded to the incoming flight by the airport officials. All safety checks and mandatory security arrangements were done prior to the arrival. Considering the Covid19 guidelines, the proper marking and distancing measures were also ensured for all passengers. Earlier on 05 May 2021, a trial flight was tested and operational requirements were checked successfully.

24 passengers arrived from Guwahati on the inaugural flight. Total pax movement during 8th May’21 was 55 nos.

Informing about the services, Shri Jyotirmoy Boruah, Airport In-charge, AAI said that it a historic moment for all of us at Rupsi as regular flight services has started under the RCS- UDAN programme of Govt. It will ensure affordable flying for all specially the lower income group population here. UDAN flight provides cheap air fares for short destinations, connecting the unconnected, he added.

Fly big airline was awarded routes under UDAN-Ude Desh ka Aam Nagrik scheme of Government of India to operate flight service at Rupsi by Ministry of Civil Aviation through a bidding process. It will operate flights on Guwahati- Rupsi-Kolkata route and back. Initially it will operate on Tuesday, Thursday, Saturday and Sunday as informed by the airline.

Airports Authority of India has re-developed this world war-II era air strip of Assam at an estimated cost of Rs. 69 Cr. The foundation stone for this re development project was laid by Hon’ble CM Shri Sarbananda Sonowal in February 2018.

Spread across 337 acres, the newly developed airport has a terminal building measuring 3,500 sqm. Equipped with 10 check-in counters, the terminal is designed to manage about 200 passengers during peak hours. The newly built runway is suitable for landing ATR-72 type aircraft.

The operationalization of Rupsi Airport will help boost the local economy of the Bodoland area and provide better connectivity to the air travellers of the adjacent districts from Dhubri, Bongaigaon, Kokarajhar, Goalpara as well as districts in the neighbouring states of Meghalaya, West Bengal and parts of Bhutan as well.

Due to the current COVID situation, no inauguration programme was arranged by AAI on the occasion.

It is need to be understood that upon improvement in COVID situation, an Inauguration ceremony would be organised involving all stakeholders in days to come.

Gauripur MLA Nijanur Rehman travelled as a pax from Guwahati to Rupsi.

MLA Urkhao Gwra Brahma while welcoming first passengers at Rupsi Airport today said that the day of 8th May(2021) is a historic day for the region.

"Today is historic day that Rupsi Airport is operational from today and first flight flying to Kolkata from Guwahati via Rupsi.Proud moment for me", Brahma added.

SP Rakesh Roushan told that sufficient security forces have been arranged along the Rupsi airport in Kokrajhar district with the operational be begins from today.

He said that Rupsi airport is an airport which fall in BTR administration and is a air communication in Lower Assam districts.

Roushan told that a strict security vigil has been made to meet a healthy security environment along the airport and it's adjoining areas in the district.

He informed that a total 24 passengers landed at the airport in it's first operational fly from Guwahati. 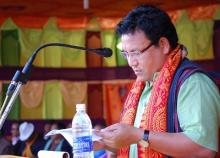