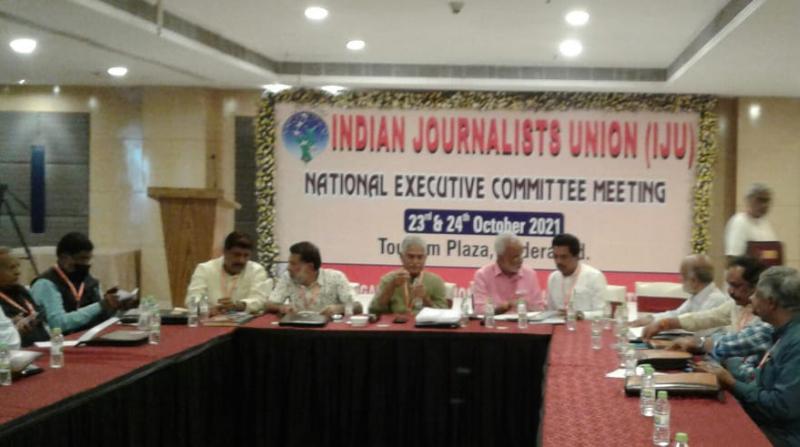 Hyderabad: The national executive committee meeting of Indian Journalists Union (IJU), which concluded on Sunday in the capital city of Telangana, discussed various burning issues concerning the practitioners of journalism across India and emphasized on effective safety & security to journalists, reforms in Press Council of India (PCI) and basic minimum facilities to the media fraternity sustaining the spirit under freedom of the press to serve the largest democracy on the globe.

Chaired by IJU president K Sreenivas Reddy, the two-day meeting held at Tourism Plaza in Begumpet locality expressed serious concern over killings of journalists by anti-social elements and filing of cases against journalists and media houses to give a signal to them to fall in line or face the music. In the presence of representatives from almost all states and union territories including Assam and Ladakh, the meet also expressed concern over a very large number of journalists falling prey to the Covid-19 pandemic.

The IJU urged authorities to probe the murders of five journalists till date in 2021 and provide adequate compensation to the victim's family. It also appealed to the union government to declare working journalists as frontline warriors and sanction compensation to all corona-victims in media across the country, which should be in exclusion from the compensatory amount of money declared by various state governments. The national union of scribes urged the provincial governments, where journalists succumbed to the corona virus invasion, to announce compensatory packages to affected families.

Expressing concern over the growing number of attacks on journalists (where India lost five journalists, namely Raman Kashyap, Manish Kumar Singh, Chenna Keshav, Sulabh Srivastava and Ashu Yadav to assailants) and media organisations in different parts of the country, the IJU meeting demanded a specific law to deal with such situations across India. It also urged the government not to misinterpret or misuse various laws with the aim of harassing media houses and not falling in line.

In a different issue, the IJU has denounced the dictatorial and unlawful activities of the outgoing PCI chairman Justice CK Prasad and demanded the restoration of credibility of the quasi-judicial body with rightful representation to the national unions. Moreover, the IJU reiterated its demand to widen the PCI with the inclusion of electronic & digital media and to rename it as Media Council of India.

The influential union demanded the reinstallation of the Working Journalists Act with more favourable provisions encompassing wages, wage revisions, job security, pension benefits and the whole gamut of working conditions for professional journalists in the country. The meeting, in a resolution passed unanimously, termed the amalgamation of the WJA 1955, into a code where working journalists are bundled along with sales representatives as dangerous to democracy.

As clarified by the Supreme Court of India, freedom of press in the country is inherently laid down in the constitutionally guaranteed right to freedom of expression. A free press, one of the most essential ingredients for safeguarding democracy, is in turn the sacred duty of working journalists and stripping of the rightfully accorded special recognition of a fraternity vested with such weighty responsibility, spells danger to the very fabric of democracy, the resolution stated.

The IJU has felt that in the present complex media scenario, it is all the more important that laws governing media & media persons and regulation of various media are strengthened with a view to promoting free media and buttressing the right to free speech. Instead of resorting to such progressive measures, the Union government has thought it fit to strip working journalists of their special recognition as enshrined in the WJA. The IJU meeting has urged the Centre to rectify the anomaly immediately by reinstalling the concerned act.

Union minister for tourism, culture and DoNER (development of north-eastern region) Gangapuram Kishan Reddy also graced the occasion, where he appealed to the media fraternity to play a proactive role in the growth of the nation. He agreed to initiate support for corona-media victims and pragmatic actions for the welfare and enrichment of journalists across the country. Andhra Pradesh information commissioner Vijay Kumar Reddy also addressed the gathering on the concluding day.

23 Jul 2017 - 7:08pm | AT Kokrajhar Bureau
A young  girl was raped by three persons at Banglajhora area under Patgaon police outpost late last evening in Kokrajhar district.An FIR was lodged with police in this regard. One of three...

1 Apr 2020 - 9:55pm | AT News
Guwahati: More and more COVID 19 positive cases have been surfacing. Two more people have tested positive in Goal para with travel history to Delhi where they attended the religious congregation...

2 May 2012 - 3:20am | editor
An inclement weather makes it all the more difficult for BSF and NDRF jawans to fish out bodies of the boat mishap victims in Dhubri on Tuesday. The day long intensified operation in Medatori...