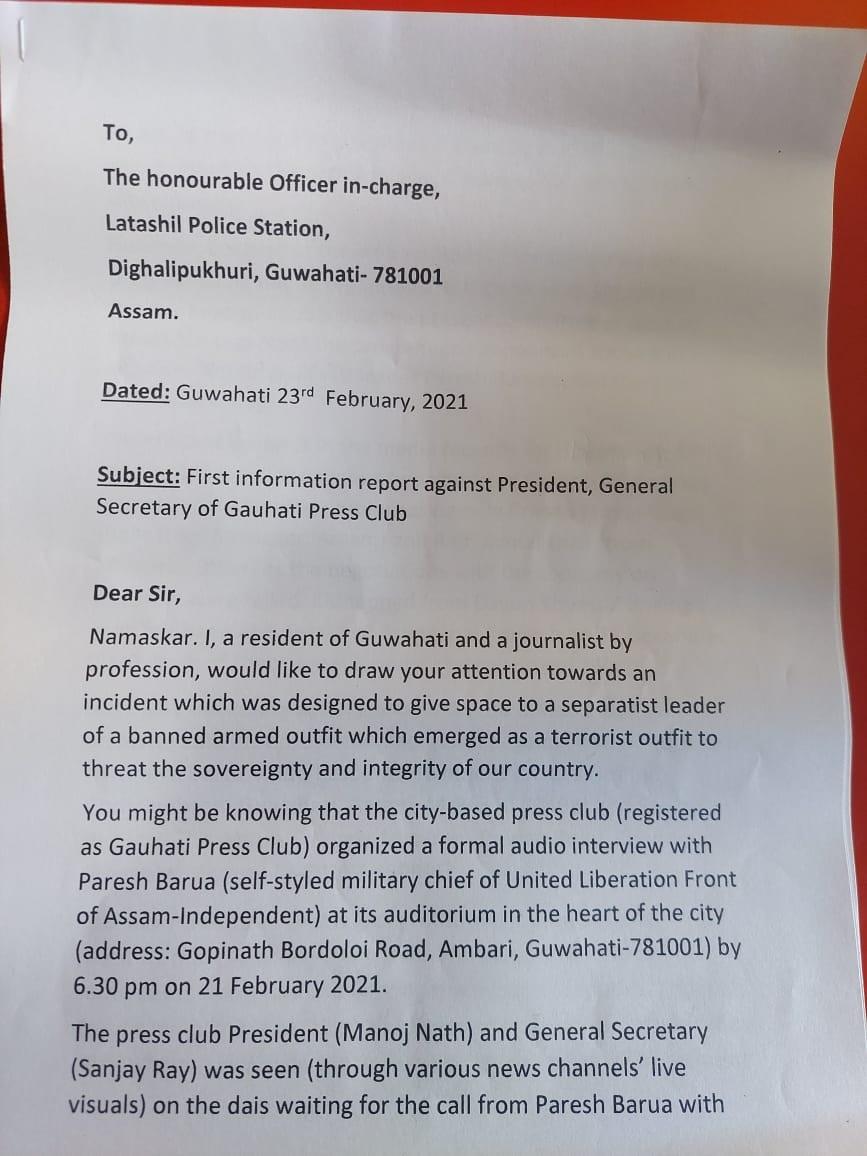 Guwahati: Alleging that the city based press club had ‘designed to give space to a separatist leader of a banned armed outfit which emerged as a terrorist outfit to threat the sovereignty and integrity’ of India, an FIR has bene lodged against the president and general secretary of Gauhati Press Club (GPC).

Senior journalist Biswajit Nath, who is a former general member of GPC, lodged the compliant at Latashil police station in the city on 23 February 2021, arguing that the press club authority ‘organized a formal audio interview with Paresh Barua (self-styled military chief of United Liberation Front of Assam-Independent) at its auditorium’ by 6.30 pm on 21 February last.

GPC president Manoj Nath and general secretary Sanjay Ray was seen (through various news channels’ live visuals) on dais of the club auditorium waiting for the call from Barua with an aim to transfer it to the sound system so that all reporters, who were present on the occasion, could listen and interact subsequently.

“However, because of the interventions of the city police the program could not be organised and it came to an abrupt end. But it is beyond doubts that the present committee of Gauhati Press Club organized the program and announced about it in advance. Notably, Ulfa (I) leader Paresh Barua called them on time accordingly,” said in the FIR. Mentionable is that the dreaded militant leader is in the media as he threatened to take punitive actions against two abducted Quippo Oil and Gas Infrastructure Limited employees namely Pranab Kumar Gogoi (hails from Sivasagar, Assam) and Ram Kumar (hails from Khagaria, Bihar).

By then, the negotiations with the company management on ransom were failed. Kidnapped from Dayun Khumsai drilling area in Changlang district of Arunachal Pradesh on 21 December, both of them are still under the custody of Ulfa (I).

Petitioner Nath, who prefers to introduce himself as a nationalist scribe, did not forget to mention that since 1998, a group of brave journalists and patriotic citizens hoisted National tri-colour in the same press club premises defying the diktat of separatist militant groups (including ULFA).

They all took tremendous risk two decades back while paying tributes to the martyrs of Freedom Movement as the militants threatened to punish the participants in Independence Day and Republic Day celebrations, asserted Nath finally urging the police to take appropriate actions against the litigants ‘so that anti-national mentality can be discouraged in this part of the country’, added the petitioner.

3 Sep 2008 - 12:47am | editor
Teez festival by the Gorkhas community is celebrated with funfair through out the state. The event in Guwahati was held in Nepali Mandir, Paltan Bazar. Hundreds of women were seen singing, dancing...

16 Apr 2014 - 4:57am | AT News
Mantu Das is upset after he came to enjoy the bihu function in Bharalumukh on Monday night. The reason is Zubeen Garg as soon as the heart throb pledged to shy away the bihu functions next year.“It’s...