The Civil Society, a national forum of activists, retired armed forces personnel and social activists, has appealed to the people of India to observe fast on tomorrow, January 30, in the martyrs' day.

While appealing to do so, the Society said in a statement, “An appeal by Civil Society to fast tomorrow on Martyrs day & observe a minutes silence at 5 pm, in support of our farmers. Should be done collectively in all towns & villages”. 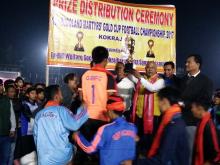 16 Sep 2015 - 8:45pm | AT News
In a major boost for students, the Arunachal Pradesh government will release their stipend in three installments. The government decided to frame a proper policy with guidelines to facilitate...