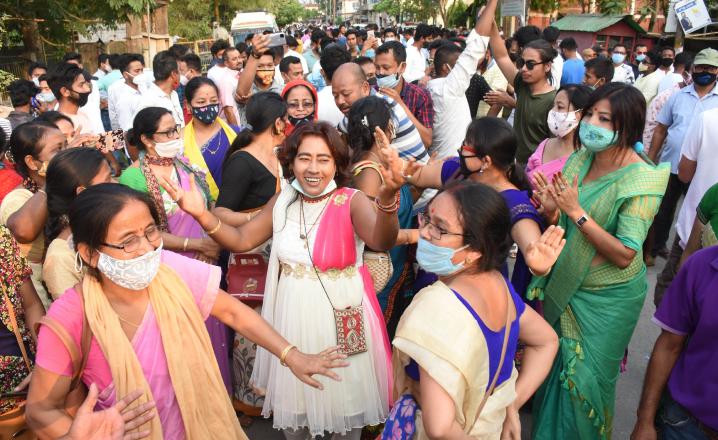 Incarcerated ,Peasant rights activist  Akhil Gogoi who heads the Raijor Dal and is languishing in jail since December 2019 on charges of sedition and inciting violence during the anti-Citizenship (Amendment) Act movement, has won from Sibsagar, making it a history in the Assam Politics to have been elected a legsilator  from jail. Contesting as an independent, he defeated his nearest rival Surabhi Rajkonwari of the BJP by a margin of 11,875 votes. The 45 year old peasant leader  is currently undergoing treatment and is admitted to the Guwahati Medical College Hospital and had filed his nomination from the medical facility. The consolidation of the leftist votes, anti-CAA sentiments and an campaign by his mother Priyoda Gogoi are believed to have worked for the peasant leader in electing him as a legislator . NEDA convenor and BJP strongman Himanta Biswa Sarma, who won the Jalukbari seat by more than 1 lakh votes spared no time to congratulate the peasant leader . Talking to mediapersons he said, “I congratulate Akhil Gogoi on his victory. I expect him to play the role of a constructive opposition ,”. Contrarily former student laeder, Lurinjyoti Gogoi who heads  the Assam Jatiya Parishad (AJP) cut a sorry figure in both the eastern Assam seats he had contested. The AJP leader finished third behind the BJP and the Congress candidates in Duliajan and Naharkatia.

6 Aug 2012 - 2:57am | editor
Three persons have been injured when a powerful bomb exploded in Goreswar on Sunday. It took place at around 4-30 and bomb was planted on a tree which exploded at a village beside the Rangia-Goreswar...

Rs 20 cr down the drain; no respite

31 Jul 2014 - 12:30pm | AT News
At a time when massive water logging wreaks havoc in Guwahati even after a heavy downpour, GMDA and water resources department take centrestage following the revelations that Rs 20 crore was spent...