Guwahati: AJP is born against Congress, BJP and AIUDF. But these parties are least bothered. BJP leader Himanta Biswa Sarma said each of the AJP candidates will have to remain satisfied with maximum 1500 votes in the 2021 assembly polls. Talking to reporters in Guwahati, Sarma said, “the newly born party is most welcomed. But it must be ensured that the traders need not down the shutters fearing donation.”

State Congress president Ripun Bora said that AJP’s emergence won’t have any adverse impact on their party’s poll prospect at all. He said that if the new regional party wants to dislodge BJP from power the student leaders should step into the oppostion’s grand alliance. “We have nothing to be worried since we have base of our own and we have millions of workers whom AJP can’t take on,” said Bora who was in Delhi to attend the Rajya Sabha session. 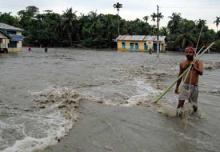 3 Sep 2008 - 2:25am | editor
Flood affected people of Puthimari area near Kamrup have been seen walking through the flood water on 02-09-08 after flood created havoc in that area on day-before-yesterday as an embankment was...