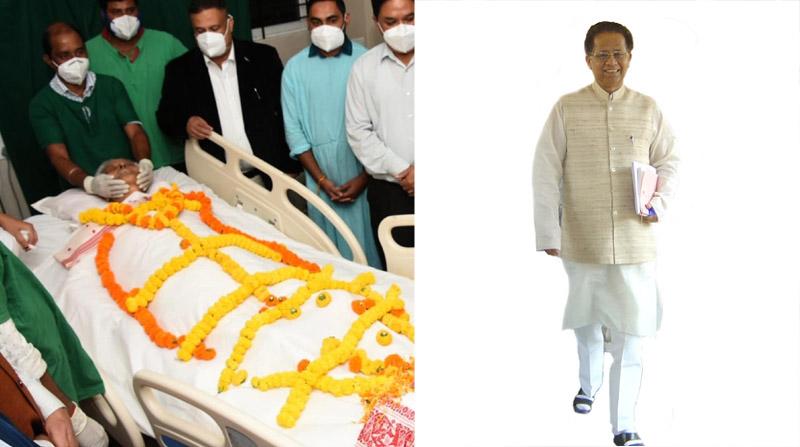 Guwahati: The light has gone off from the life of a political era in Assam. Congress veteran and former Chief Minister Tarun Gogoi is dead. The end came at 3.34 in the evening at the Guwahati Medical College Hospital where he was undergoing treatment of post COVID19 complications. He was 86 and is survived with his wife Dolley Gogoi, son Gaurav Gogoi and daughter Chandrima Gogoi who were around him as he passed away.

Chief Minister Sarbananda Sonowal was the first to have paid the last respect for Gogoi. A speechless Sonowal said, “I have lost my father.” Prime Minister Narendra Modi, his cabinet colleagues and Chief Ministers from other states have called up Gaurav Gogoi, MP from Kaliabor, condoling the unexpected death.

The Assam Government has announced 3 days state mourning from Monday as a mark of respect for the seasoned political persona.

Shri Tarun Gogoi Ji was a popular leader and a veteran administrator, who had years of political experience in Assam as well as the Centre. Anguished by his passing away. My thoughts are with his family and supporters in this hour of sadness. Om Shanti. pic.twitter.com/H6F6RGYyT4

State Congress president Ripun Bora said that his mortal remains would be kept at GMCH for the night and at 11 AM, it these would be taken to his official residence, then to the State Secreteriate and then to the Rajiv Bhwan and to would be shifted to the Sankardev Kalakhetra. His family members have yet to locate a viable spot for cremation.

I am deeply hurt by the death of veteran politician and former Chief Minister Tarun Gogoi who served the state as the Chief Minister for three consecutive terms with deep commitment. pic.twitter.com/TKwqPohpMk

Millions of people across the state have deeply condoled his death and conveyed sympathy to the bereaved family members. Many people have started coming from many far flung areas to pay last respect to the three time Chief Minister.

Born to Dr Kamal Gogoi and Usha Gogoi at the Rangajan Tea Estate in 1934, Gogoi had his graduation from JB College in Jorhat and shifted to Gauhati  University to pursue law courses. He started his political career in the Jorhat Municipality and then contested the Lok Sabha polls from Jorhat in 1971. But later he contested from Kaliabor for 5 times.

Shri Tarun Gogoi was a true Congress leader. He devoted his life to bringing all the people and communities of Assam together.

For me, he was a great and wise teacher. I loved and respected him deeply.

I will miss him. My love and condolences to Gaurav & the family. pic.twitter.com/jTMfSyAJ6J

In AICC he had served the party in several capacities and was closed to Indira Gandhi and Rajiv Gandhi, In 1991, Gogoi was inducted as Union minister and for a brief period of time he was elected as Margherita MLA at a bypoll.

Gogoi, who later was appointed as state Congress committee took oath as Chief Minister in May, 2001 and remained in the same stint till May 2016. According to political analysts, Gogoi would be remembered for his peace initiatives with the rebel outfits, who, mostly, struck peace deal with the Centre. Further Gogoi initiated the process to update the national registry to detect the illegal settlers. May his soul rest in peace.

400 students get degrees at DBU

13 Sep 2014 - 3:00am | CM Paul
The Governor of Assam and Visitor to Assam Don Bosco University Shri Janaki Ballav Patnaik presided over, 12 September, at the 3rd annual convocation along with the Chancellor, Vice-Chancellor, and a...