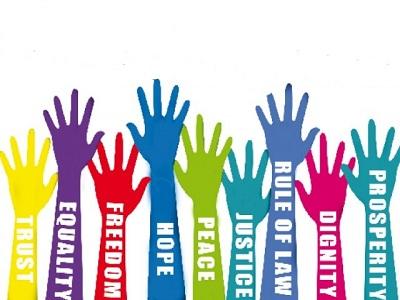 Human rights are integral part of life’s journey. In spite of having rights there are instances when our rights are challenged. In the past or at present there are examples of human rights violations around the world. Human rights are of global concern and different nations have different rights for their citizens.  In the global perspectives the ‘Declaration of Human Rights’ remains one of the most significant documents to have been drafted by the international community. Article 1 of the Universal Declaration of Human Rights says ‘all human beings are born free and equal in dignity and rights. They are endowed with reason and conscience and should act towards one another in a spirit of brotherhood.’

The Human Rights Day is observed on the 10th December every year to bring to the attention of the people of world towards the Universal Declaration of Human Rights (UDHR), which was adopted and proclaimed by the General Assembly of the United Nations in 1948 as the common standard of achievement. The Declaration is recognition of the fact that the inherent dignity and the equal and inalienable rights of all members of the human family are the foundation of freedom, justice and peace in the world and reaffirmation of faith of the people of United Nations in the fundamental human rights.

The formal inception of Human Rights Day dates from 1950, after the Assembly passed resolution 423 (V) inviting all States and interested organizations to adopt 10 December of each year as Human Rights Day. When the General Assembly adopted the Declaration, with 48 states in favor and eight abstentions, it was proclaimed as a "common standard of achievement for all peoples and all nations", towards which individuals and societies should "strive by progressive measures, national and international, to secure their universal and effective recognition and observance". Although the Declaration with its broad range of political, civil, social, cultural and economic rights is not a binding document, it inspired more than 60 human rights instruments which together constitute an international standard of human rights. Today the general consent of all United Nations Member States on the basic Human Rights laid down in the Declaration makes it even stronger and emphasizes the relevance of Human Rights in our daily lives.

This year’s slogan, ‘Human Rights 365’, encompasses the idea that every day is Human Rights Day. It celebrates the fundamental proposition in the Universal Declaration that each one of us, everywhere, at all times is entitled to the full range of human rights, that human rights belong equally to each of us and bind us together as a global community with the same ideals and values. The UN General Assembly proclaimed 10 December as Human Rights Day in 1950, to bring to the attention ‘of the peoples of the world’ the Universal Declaration of Human Rights as the common standard of achievement for all peoples and all nations.

‘The United Nations protects human rights because that is our proud mission – and because when people enjoy their rights, economies flourish and countries are at peace,’ says  Ban Ki-moon, Secretary General of UN . In his statement he had mentioned  “I call on States to honour their obligation to protect human rights every day of the year. I call on people to hold their governments to account. And I call for special protections for the human rights defenders who courageously serve our collective cause.”

In his message Zeid Ra'ad Al Hussein, United Nations High Commissioner for Human Rights said that “the power of the Universal Declaration is the power of ideas to change the world. It tells us that human rights are essential and indivisible – 365 days a year. Every day is Human Rights day: a day on which we work to ensure that all people can gain equality, dignity and freedom. The UN Human Rights Office stands with the millions of people around the world whose voices are denied.” He also added that ‘I look forward to you joining us, whether you do so via social media or in person. Together, we must demand what should be guaranteed: our human rights, universal, indivisible, inalienable, for everyone, 365 days a year.

Past Observances of Human Rights Day

National Human Rights Commission of India’s  Chairperson, Mr. Justice K.G. Balakrishnan has said  “let us take a pledge that each one of us will stand-up for the promotion and protection of human rights and that we will not be party to any such action through words or deed that may undermine the rights of others towards a life of dignity. No occasion then Human Rights Day can be better to orient ourselves towards achieving this goal of promoting the culture of Human Rights amongst the masses.”

It is to be mentioned that NHRC  has disposed of 13 lakh 70 thousand 391 cases till the 30th November, 2014 out of 14 lakh 9 thousand 476 cases registered by it either suo motu or on complaints or on intimation by the prison and police authorities. It has made a number of interventions on key issues of human rights, which include, among others, issues of bonded and child labour, prison reforms, right to health, mental healthcare, rights of persons with disability, silicosis, illegal clinical drug trials, pricing of drugs, corporate-social responsibility, manual scavenging and sanitation, human rights of women.

Article 3 of the UDHR says everyone has the right to life, liberty and security of person.  But presence of Armed Forces (Special Powers) Act, 1958 is a hindrance to this statement. As long as acts like AFSPA is there, the true spirit of freedom and liberty is certainly missing in some part of the nation. In a democratic nation there should not be an act like AFSPA as it is against the life and liberty of the people. There can be alternate mechanism to end conflicts or insurgency but at any cost no civilian should be harassed or killed in the name of security.

Let us all stand united to uphold the human rights for all. From child to old every one must be respected and their human rights are to be protected. If a child is missing school and old person is not getting respect and other amenities then we have to stand and raise our vice. There are certain rights and we need to be an advocate for the rights. We have to be vigilant every day if we want our liberty and freedom. Let us spread human rights and popularize the UDHR. We can use different mediums including social media to reach out to more and more people in short span of time.  Remember if we do not raise voice for rights then no one else will raise voice for us.

“To be yourself in a world

Permalink Submitted by Niyor on Wed, 10/12/2014 - 19:11
“To be yourself in a world that is constantly trying to make you something else is the greatest accomplishment.” ― Ralph Waldo Emerson The LGBT(Lesbian Gay Bisexual Transgender) Community epitomises this.. The preamble to the UN's Universal Declaration of Human Rights(UDHR) states that," The recognition of the inherent dignity and of the equal and inalienable rights of ALL members of the human family is the foundation of freedom, justice and peace in the world... Human rights should be protected by the rule of the law...' What does one do when the law itself is cause for infringement of human rights? The Assam Human Rights Commission observes The Human Rights Day on the 10th of December along with the rest of the world. In great irony, the very next day, 11th December is the day when the Supreme Court struck down the Delhi High Court's reading on Sec 377 IPC, last year, and essentially rendered the LGBT community criminals. Now, between the Judiciary and the Legislative, the LGBT community is caught between the devil and the deep sea. The basic premise itself that one adult human can dictate life for another is preposterous. But this is the preposterous reality the community has suffered for centuries now. On the occasion of a year elapsing since the re-criminalisation, I humbly ask of you, as a fellow human being, - how would you feel if someone considered you incredibly inherently wrong for loving who you love, and if someone conceived of laws to actually put you behind bars for it? In hurt and indignation, Niyor Medhi, Kharghuli, Guwahati

17 Oct 2015 - 10:27pm | Siddhartha Handique
A pall of gloom descends in Golaghat when a bus rammed into a biker in the outskirt of the town on Saturday. The accident took place in Padumoni the speeding bus bearing No AS05-B-5309 hit the...