11 Mar 2014 - 9:15pm | AT News
At least 25 Congress legislators have drawn up a slew of strategies to put chief minister Tarun Gogoi in a fix.The meeting began at 7 in the evening at the residence of Dr Himanta Biswa Sarma on... 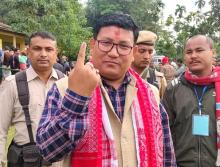 Pramod Boro to take over as BTC chief

13 Dec 2020 - 3:05pm | AT News
Guwahati: It's official. Pramod Boro will take over as chief of the Boroland Territorial Council (BTC).  The formal announcement came after the UPPL head had a meeting with Chief Minister...

20 Dec 2007 - 2:54am | editor
NEW DELHI: Assam Chief Minister Tarun Gogoi is attending a meeting of Chief Ministers on Thursday to discuss the state's security scenario. To be chaired by prime Minister Dr Manmohan Singh, the...