30 Oct 2011 - 3:28pm | editor
In yet another bizarre incident, a young girl who was believed to have died a couple of days ago surfaced in a police station on Friday. It took place in Nagaon district. Nineteen-year-old... 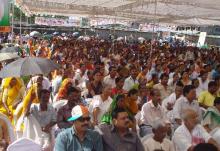 31 Oct 2008 - 8:39pm | Daya Nath Singh
It was Thursday the 30th October 2008, when Assam Pradesh Congress Committee (APCC) was organizing a ‘Gandhi March’ from the party headquarters at Rajiv Bhawan to Mangaldoi, the...