8 Mar 2017 - 4:13pm | Hemanta Singh
Brisk polling is going on in the second phase of assembly election in Manipur covering 22 constituencies on Wednesday.Amid an elaborate security arrangement and tight vigil,  voters in large... 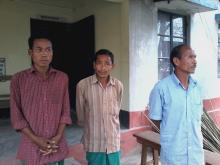 29 Apr 2016 - 10:10pm | AT Kokrajhar Bureau
Police arrested three persons in connection with the missing of college student Ashinta Basumatary alias Ola, who went missing from his house at East Maligaon in Kokrajhar, since April...

3 Sep 2012 - 9:48pm | Anil Sarma
Lions Club of Nagaon Greater organised an Eye Camp on September 1 at Jakhalabandha Hospital. A total of 415 patients were examined and free medicines were provided to them. Out of the total cases,...