The Election Commission is fully prepared to ensure free and fair Lok Sabha polls in Assam along with other parts of the country.

The country’s poll panel is all set to issue voters photo identity cards by April 15. This was what a delegation of election confirmed in Guwahati on Sunday.

Led by Dr Alok Sukhla, the delegation is on a stock taking visit to the state on Sunday where poll preparedness was discussed. 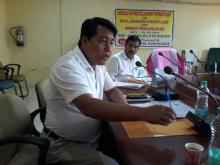 26 Mar 2015 - 4:56pm | Hantigiri Narzary
A media sensitization workshop on weekly iron and folic acid supplementation was held today at BTC secretariat conference hall in Kokrajhar. It was organised by National health Mission and...