Expressing grave concern over the ceasing of publications of all seven daily newspapers in Arunachal Pradesh for successive second day on Sunday, the Journalists' Forum Assam (JFA) has urged the authority to resolve the matter for the sake of thousands of esteemed readers. The indefinite shutting down of all publication houses in Itanagar, the capital city of frontier State in northeast India, came into force since February 14 in protest against the authority's anti-media ruling.

The journalists based in Itanagar sat together in Arunachal Press Club (APC) on Saturday and decided to continue the movement that involved local newspapers and cable news channels. The meeting under the supervision of Arunachal Pradesh Union of Working Journalists (APUWJ) also resolved to send another memorandum to the State chief minister Nabam Tuki.

Earlier both the media bodies took a strong decision on Friday to shut all newspapers down apprehending confrontations between the media persons and the members of Students' Union Movement of Arunachal (SUMA), which staged a demonstration on February 14 against The Arunachal Times, an Itanagar-based morning daily. The conflict began when the capital complex district magistrate Mige Kamki permitted the students' organization to stage the protest programme in front of Arunachal's first English newspaper. The development angered the media fraternity as the authority had virtually bowed down to the pressure of SUMA, which has a background of confrontations with the media.

The APC and APUWJ, had earlier sent a joint representation to the State chief minister's office asking for immediate suspension of the Itanagar capital complex deputy commissioner Mige Kamki for his permission to the SUMA, which had problems with The Arunachal Times from before, to hold the demonstration against the newspaper house. "The deputy commissioner's 'senseless' action of granting permission to the SUMA for the programme against The Arunachal Times could result in confrontation between the media employees and members of the students' body," said the representation, adding that, 'supporting the irrational demand of SUMA to stage demonstrations against a media house', Mige Kamki had signaled that the government was indirectly for curtailing the freedom of press.

However, Mige Kamki claimed through a press statement that he permitted SUMA 'for peaceful rally/dharna at the newly designated dharna/ rally ground near Tennis Court inside IG Park, Itanagar' and not 'staging rally/ dharna outside the Arunachal TimesoOffice on 14th February, 2014'. Denying the allegation against him 'as baseless, unfounded and irresponsible', the deputy commissioner also commented that the indefinite shutdown of all Itanagar based media houses is 'uncalled for and unwarranted'.

Meanwhile, condemning any kind of threats to the media houses in any case, the JFA, in a statement issued by its president Rupam Barua and secretary Nava Thakuria, asserted that the Arunachal Pradesh government should intervene on the matter and resolve the issue amicably such that the people do not get deprived from having their morning newspapers because of the conflict.

On the other hand, the Assam based scribes' body also appealed to the media fraternity of Arunachal Pradesh, which has neither any satellite news channel nor active news portals, to rethink on their decision to shut down the publications indefinitely keeping an eye on the denizens of the mountainous State, bordering Bhutan, Tibet and Burma. 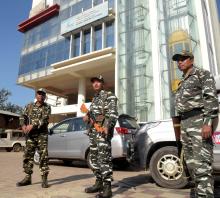 28 Mar 2013 - 6:48pm | AT News
A 135 year old man breathed his last in Morigaon district. The end of the life of Puna Konwar came in Baribandha village on Wednesday.  Konwar, who has always been in the news for his longevity...