Patnaik took stock of the construction work and improvement of road connectivity in Dima Hasao and Barak Valley districts during a meeting with the chief executive member, officials of the Dima Hasao Autonomous Council and PWD at Raj Bhavan on Wednesday. A statement said the governor has directed the PWD secretary to inspect the bad roads in and around Silchar and immediately undertake repair work.

The PWD officials were also asked to prepare a separate estimate for widening and straightening of road from Lanka to Haflong and beyond and improve road connectivity between Haflong and Harangajao. The governor also asked the officials to expedite the process of acquisition of land for the four-lane highway by taking up the matter with the district administration. 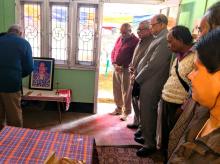 3 Apr 2008 - 8:57pm | editor
In yet another case of mushroom consumption, four people died on Thursday morning in upper Assam’s Dergaon area. According to information, the incident took place at Badulipara area when four...

11 Apr 2016 - 5:47pm | AT Kokrajhar Bureau
Voters from irrespective of communities come out on a enthusiastic mood and turn in long queue to the voting centres to cast their votes o the second phase Assam asembly polls since early morning,...