The first HIV/AIDS case in India was detected in 1986 and since then, HIV infections have been reported in all states and union territories. India has a low overall rate of infection, however, certain places in the country have been more affected than others.

It is seen that HIV is more severe in the southern half of the country in the states of Andhra Pradesh, Maharashtra, Tamil Nadu and Karnataka and the far northeastern states of Manipur and Nagaland and Mizoram.  As per the HIV statistics of 2010, India had 23.9 lakh people infected with HIV in 2009 at an estimated adult HIV prevalence of 0.31%. Adult HIV prevalence among men was 0.36%, while among women, it was 0.25%. 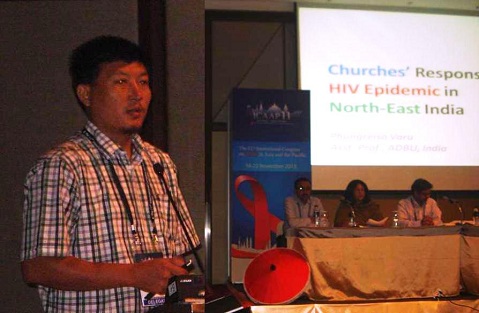 Phungreiso Varu, Assistant Professor at the School
of Social Sciences at Assam Don Bosco UniversityThe Church response in the early 1980s and 1990s was lukewarm, with lack of concern. The church leaders then said, “No good Christians, no good people indulge in drug addiction, alcoholism, smoking, other social evils and immoral sexual activities leading to HIV/AIDS and other STDs.

It was then that drug abuse started raising its ugly head from 1980 in Manipur and later in other North East States. In the aftermath of its encroachment in the society especially among the youths, there were cases of snatching of gold chains and earrings from children and instances of killing children too.

The militant underground organisations also started targeting the addicts as a means of correction and prevention of addiction among the people of Manipur. In 2007 there were several news reports of addicts being shot in the leg by the under ground groups and some addicts even killed. Controversy over Christian funeral service to the shot dead addicts also arose.

The situation was such that people from all walks of life had to put their heads together and intervene on these urgent social diseases.

In 1985, the International Year of the Youth many seminars, workshops particularly by Pastors, church leaders, community leaders, and youth groups made it a real year of awakening mostly centring on drug abuse and youth.

Today, there are many participatory Churches involved in HIV/AIDS activities like awareness campaign, treatment and home-based care. The encouragement and urging from World Council of Churches (WCC) in Geneva, in its book entitled: “Facing AIDS, Challenges, Church Response” was a great springboard for the Christian Missionaries and their role in home based care in giving counselling, medical care and support, nutrition, social rehabilitation/social security to a certain extent is seen very important.

Government agencies have recognized the Churches in Northeast India as an essential and inevitable contributor in controlling and mitigating the impact of HIV/AIDS says research scholar from the region.

Assistant Professor in the School of Social Sciences at AssamDonBoscoUniversity Mr Phungreiso Varu made the claim while presenting a paper at the 11th International Congress on AIDS in Asia and the Pacific held last week in Bangkok.

The scholar from Manipur says, “The policy effort to engage Churches as key partners in implementing HIV and AIDS program, nationally or regionally is, henceforth unavoidable.”

The HIV epidemic in the North East India is largely driven by use of HIV infected syringes and needles by injecting drug users (IDUs) and increasing transmission of HIV through sexual mode.

Its proximity to the golden triangle (Myanmar, Laos and Thailand) and drug trafficking routes, a large number of drug users with high prevalence of injecting and sharing practices, interface of drug use and sex work, and low usage of condoms across the region have contributed to an exceptional rise in cases of HIV and AIDS.

Among the North Eastern states, Manipur has shown the highest estimated adult HIV prevalence of 1.22%, followed by Mizoram (0.74%) and Nagaland (0.73%).

Three percent of India's HIV positive cases today come from these northeast states of Manipur, Mizoram, and Nagaland, which has only 4% of the country's total population.

Initially the Churches “were reluctant to respond to HIV/AIDS intervention considering the high prevalence and pressing needs of the region.”

However, churches in the region faced new challenges where HIV/AIDS pandemic claimed the lives of many congregations’ members during the last few years. Realizing the impact and importance of addressing HIV, the churches responded and played significant role in HIV prevention, providing care and support as service-provider in partnership with various government and civil groups.

The scholar Varu further asserts, “Given the significance of these statistics and the importance of addressing HIV and AIDS issue, the government is increasingly showing commitment towards greater participation of churches, civil societies and leaders of communities.”

Today, the Churches have established a strategic partnership with state government (Health and Family Welfare and other related Departments).

In turn, Government and Civil Societies equipped the church leaders and pastors to respond to the HIV and AIDS challenges, and advocacy to build relationship with local churches and its congregation members by organized awareness campaigns in church functions and community festivals.

Churches initiated seminars and salvation camps for youth and Sunday school students with training conducted for church leaders and youth in the program management of HIV and AIDS issues.

Besides integrating HIV/AIDS teaching as an integral part of religious preaching, Churches developed behavior change communication resources and disseminated them.

In the recent years, some 2,000 youths and 1,000 women were trained on HIV and AIDS prevention, care and support while reducing stigma and discrimination programs.

The church groups were able to help some 70 orphans and 200 widows infected and affected by HIV.

The Catholic Bishops Conference of India through its Healthcare Commission has been involved in the Project of Access to Care and Treatment (PACT) sponsored by the Global Fund since 2007. This step was taken as a concrete expression of the policy of the bishops in relation to HIV/AIDS, “a commitment to compassion and care.”

The Catholic Health Association of India (CHAI), one of the world’s largest non-governmental organisations in the health sector, has more than 160 Catholic institutions across the country involved in HIV/AIDS prevention, care and rehab programs. Of these, 86 have specialized care centers as well as special shelters for children affected by HIV and AIDS, “where in addition to healthcare, education and rehabilitation are a priority."