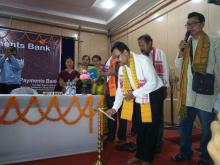 1 Sep 2018 - 8:17pm | AT Kokrajhar Bureau
Kokrajhar: Along with rest of the state, India Post Payments Bank (IPPB) is also launched in Kokrajhar today at a programme held at Commerce College auditorium.  In Goalpara division, twenty...

25 Apr 2012 - 4:36am | Ritupallab Saikia
The Gomariguri Block Committee of Bharatiya Janata Party has sent a memorandum to State Election Commissioner opposing Election Commission’s directives to the voters to submit their photos at own...