For the past several years, the Kukis of Manipur in Northeast India have been observing September 13 as “Black Day” (Sahnit Nikho in local Thadou dialect) to remember the death of hundreds of Kukis during the Kuki-Naga clashes in the 1990s.

September 13, 1993 was the highest number of Kukis killed on a single day by the Naga Lim Guard and the Nationalist Socialist Council of Nagaland led by Isak Chishi Swu and Thuingaleng Muivah (NSCN-IM).

Since 1994, the Kuki people across India and abroad have observed the day with mass prayers for peace, love and security. On this day, Kuki households put up a black flag and abstain from participating in entertainment programs. 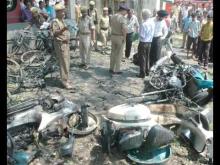 15 Jun 2011 - 6:23pm | Jayanta Kumar Das
The brutal gang rape and murder of a 35 years old mentally retarded woman at Kalaigaon has created sensation in the district. According to information, one Alagjan Khatun (35) daughter of Mosarab Ali...