Ujjal Gogoi of Gelakey, died due to Japanise Encephalities at a nurshing home of Dibrugarh on Monday. He was 35. He left his wife and one son.

27 Jul 2008 - 4:32pm | Ranjan K Baruah
Abhinaya, an NGO working in the field of art and culture in North East India is organizing an evening of Fusion music and dance on 27th July, Sunday at Rabindra Bhawan, Guwahati from 6.30 pm onwards...

3 Jul 2015 - 10:18pm | AT News
Caught in a barrage of criticism over his recent suggestions to the Centre on NRC, Chief Minister Tarun Gogoi said that his government is committed to a flawless NRC.In a statement issued to the... 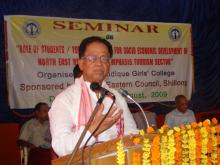 28 Aug 2009 - 12:00pm | nabajit_dutta
A two day Seminar on the theme “Role of students/Youth and Women for socio economic development of North East with special emphasis on Tourism Sector” organized by Handique Girls' College...