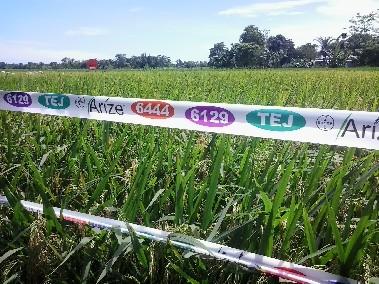 Earning a livelihood through agriculture has never been easy in Assam. But, in a welcome departure from tradition, farmers of Sonertari village of Barpeta district have opted for multiple-cropping and are harvesting three different crops a year.

Currently, with the help of agriculture department of the state, the tillers are busy in harvesting 270 hectares of paddy field where they have grown the hybrid variety ‘Arize 6444’ and are reaping a rich harvest.

When asked, a farmer Hakim Ali who has been doing farming for the last 50 years, he said that prior to Arise 6444 he used to cultivate with Chinese Iri which yielded for about 600 to 800 kg per bigha but the yield has almost doubled he switched for Arise 6444 variety with a produce of around 1200 to 1400 kg per bigha.

According to him, despite the high price for Arize seeds which costs around Rs 300 per kg compared to the cheaper varieties costing around Rs 200, Arize is far more profitable. “First, because with Arize it requires just one kg seed per bigha while on the other hand the other seeds require around 5 kg seeds for the same area. The hybrid varieties also require less water for irrigation which saves the cost of diesel and less labour for sowing,” he said.

The agricultural department has been ably supporting these farmers by providing them training and assistance for cultivating hybrid rice. On Monday, the department in collaboration with the economics and statistics department organized a crop cutting experiment at Sonertari village as per norms of National Statistical  Survey Organization (NSSO) where they found the per bigha crop yield to be 1320 kg.

Speaking on the occasion, agriculture director K Barkakoti said that the entire country at present is looking towards eastern India for meeting the demand of rice production because the output in other states like Punjab and Haryana are going down. “Hence it is now the responsibility of the eastern India to feed the country and for that we will have to increase our food output with the help of hybrid crops under the Bring Green Revolution to Esatern India (BGREI) scheme.

No salaries for teachers in BTC!

3 Jun 2017 - 10:14pm | Shajid Khan
The BTC cell of Higher Secondary Teachers’ and Employees’ Association has expressed serious concern over the extraordinary delay in payment of last two months salaries to its teachers and employees...

18 Nov 2013 - 9:12pm | Ronali Hazarika
Assam being one of the cardinal states amongst the eight Northeastern states of India is regarded as the gateway of Northeast India which is blessed with ample natural resources in the form of green...

2 Apr 2008 - 2:12pm | editor
In yet another setback for ULFA before a few days left for its foundation day, the Army busted a hideout inside the Manabhum Reserved Forest and recovered a huge cache of arms and ammunition with a...