The Assamese Society in Malaysia celebrated Rongali Bihu on May 11, 2013 with traditional fervor and gaiety. It was an occasion to reconnect with one’s roots and a platform to showcase the best of Assamese cuisine, attire and culture.

One of the highlights of the program was the Hussori performance. The hussori troupe was led by Probin Bora and Himangshu Sharmah with dhol, Tajgir Rahman with taal, Gunajit Das on toka and Apurba Das on the traditional cymbal, supported by Bikram Baruah, Saurabh Mahanta, Amit Saha, Chandrasekhar Singh, Raktimabha Adhypak, Yasmin Hazarika, Trisha Hazarika and Panchalika Bordoloi.

In this occasion Children’s also performed a lively Jhumoor Dance. 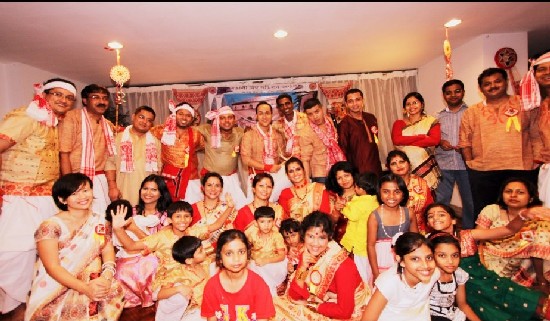 20 Apr 2010 - 1:30am | editor
The planning commission has allocated Rs 7,645 cr for Assam for the current fiscal. The amount was fixed at a meeting between Chief minister Tarun Gogoi and plan panel deputy chairman Dr Montek...

21 Mar 2012 - 9:12pm | editor
Chief Minister Tarun Gogoi on Wednesday claimed that the Comprehensive Cleft Care Centre at the Mahendra Mohan Choudhury Civil Hospital here in Guwahati, is the best in the world. Addressing a...

24 Jan 2014 - 1:52pm | AT News
Despite tight security, Guwahati has become the safe transit point for a section of arms smuggler.Railway police arrested a youth and seized two pistols from his possession from Guwahati Railway...