Dispur will handover the Gangaram Kaul murder case to the Central Bureau of Investigation for a thorough probe.
Minister Rockybul announced it on the floor of the Assam Assemby on Monday it in the face of massive demand for CBI probe into the sensation murder where a CPI-ML leader was killed in Tinsukia district on March 25. 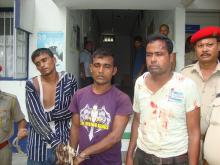 8 Feb 2017 - 5:27pm | AT New Delhi
The North Guwahati police have arrested two IITGuwahati students on molestation charges during a recent festival inside the campus of the country’s premier seat of science and technology. Identified...