Once again Merapani falls in the deep grip of tension when unidentified miscreants burnt down a house on Tuesday. The incident took place at Garhbasti along the Assam-Nagaland border where owner of the house Rabi Gogoi managed to escape. On the other hand, thousands of vehicles have been remaining standred on the national highway leading to Nagaland due to indefinite economic bandh against the state.

12 Dec 2015 - 3:49pm | AT News
A prize money debating competition will be held on the topic of "Mutual divisiveness is the prime impediment in securing the future of indigenous people" on January 10, 2016 at Gauhati Commerce...

3 Nov 2020 - 5:31pm | AT News
Guwahati: Former Chief Minister Tarun Gogoi is stable.  According to Guwahati Medical College Hospital authorities, the former CM who was rushed to ICU on Sunday midnight is properly... 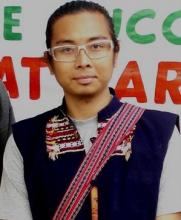