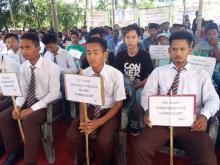 15 May 2012 - 2:03am | editor
Assam will soon have a special cell of police to tackle the menace of fake currency racket. Addressing a press conference in Guwahati on Monday, chief minister Tarun Gogoi said that the incidents of...