Security forces apprehended an ULFA bomb expert and seized a powerful IED in two different places in Assam on the ULFA Army Day' on Friday.

Indentified as Tapan Phukan alias Bhabani Khaklary, the ULFA bomb was arrested from Solmari village in Lakhimpur district. He was trained in Myanmar.

On the other hand, security forces seized a powerful IED, weighing more than one and a half kg during a joint operation by the police and army in Teestapara area in Dhubri district.

Meanwhile, security was tightened throughout the state following a directive by the union home ministry on ULFA's 'Army Day' on Friday. 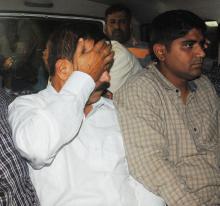 20 Dec 2010 - 3:48pm | Nava Thakuria
The Indian Federation of Working Journalists has condemned the attacks on journalists in Arunachal Pradesh and urged the Dorji Khandu government at Itanagar to act promptly. The federation also...

27 Jul 2009 - 8:15am | Ranjan K Baruah
In a bid to popularise the cultural richness of Tai Ahoms for the global reach , a website was lauched today at the Guwahati Press Club. Bijoy Bakal, Jaba Borgohain, Titu Kumar Hazarika and Buljit...