Journalists’ Forum Assam (JFA) expresses serious concern at the mysterious death of journalist turned advocate Deva Kumar Das following the simple injury by a stray leopard in Guwahati on January 7. Deva Das with two others were wounded by the leopard in broad day light, as it got panicked while trapped in a residential area adjacent to Navagraha hills at Silphukhuri locality on Saturday. All the injured were admitted to hospital, where Deva Das was given first-aid and released by the attending doctors.

But next morning Deva Das, 49, was found dead at his residence. A bachelor by choice Deva Das stayed alone with some renters in the building and the door of his room was not locked from inside when he was seen lying on his bed. His face was full of blood and some clots were observed at the wall as well.

Even the attending doctor Dr PK Padampati of MMC Hospital, Guwahati expressed shock, while talking to the media, at his death as Deva Das received a nominal injury.

The JFA suspects that the miscreants targeted Deva Dason the fateful night taking advantage of the situation. Once an working journalist and later shifted to practicing law, Deva Das lodged an FIR at Chandmari police station few days back expressing apprehension about the threat on his life following a property dispute. So the journalist’s body urges for a high level enquiry into the mysterious death of Deva Das. 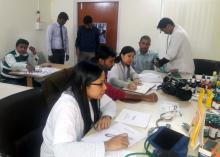 4 Sep 2012 - 1:45pm | editor
Sensation prevails in Guwahati when a post graduate student was found dead on Monday. Identified as Pritam Das, the body was found at the No 1 hostel in Bhangagarh at 6.30 in the evening. Police...