Supporting the Anna Hazare’s anti-corruption movement, the people of entire the Howraghat area took out candle rally on Tuesday evening at Assam HAD Minister, Kharsing Engti’s home town Howraghat. It may be mentioned here that along with joining of common people, large numbers of Kharsing Engti’s supporters appeared coming out to the street and joined in the Anna Hazare’s anti-corruption movement taking candle lights and banners defying their party protocols. From the point of view, it is clear that people are now completely indifferent against the massive corruptions are on in the Country. It needs to be mentioned here that taking out rally by the Congress supporters against corruption is the first time in Howraghat. 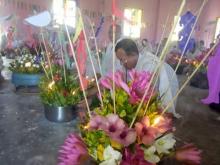 13 Oct 2015 - 5:16pm | Chow Bilaseng Namchoom
Sitang Mei-Pee, a Buddhist celebration was observed with great devotion by the Theravada Buddhist across Arunachal Pradesh on Tuesday. Sitang Mei-Pee generally marks the end of rainy season and is...

29 Jul 2016 - 2:49pm | AT News
Assam flood scene deteriorates further on Friday with more and more areas coming under the surging waters of the Brahmaputra and its tributaries. The toll has gone up to 27 in 22 affected district...