Modern medicines have improved in many grounds. People have been benefited around the world for the modern medicines. Health care has become easy for some while it has become a challenge for many especially in the developing and poor countries. Progress on the one hand on research and development and losing of resistance on the other hand has become a concern for many around the world. Amongst some of the problem which occurs these days is ‘Antimicrobial Resistance’. Antimicrobial resistance (AMR) is resistance of a microorganism to an antimicrobial medicine to which it was previously sensitive. Resistant organisms (they include bacteria, viruses and some parasites) are able to withstand attack by antimicrobial medicines, such as antibiotics, antivirals, and antimalarials, so that standard treatments become ineffective and infections persist and may spread to others Antimicrobial resistance is not a new problem but one that is becoming more dangerous; urgent and consolidated efforts are needed to avoid regressing to the pre-antibiotic era.

There is no doubt that we live in an era in which we depend on antibiotics, and other antimicrobial medicines to treat conditions that decades ago, or even a few years ago in the case of HIV/AIDS, would have proved fatal. When antimicrobial resistance - also known as drug resistance - occurs, it renders these medicines ineffective.

Some of the facts associated with AMR:

Ø Resistance to earlier generation antimalarial medicines such as chloroquine and sulfadoxine-pyrimethamine is widespread in most malaria-endemic countries.

Ø Inappropriate and irrational use of antimicrobial medicines provides favourable conditions for resistant microorganisms to emerge, spread and persist.

Antimicrobial resistance a global concern because infections caused by resistant microorganisms often fail to respond to the standard treatment, resulting in prolonged illness and greater risk of death. It also reduces the effectiveness of treatment because patients remain infectious for longer, thus potentially spreading resistant microorganisms to others. When infections become resistant to first-line medicines, more expensive therapies must be used. The longer duration of illness and treatment, often in hospitals, increases health-care costs and the financial burden to families and societies.

In 1948, the First World Health Assembly called for the creation of a "World Health Day"(WHD) to mark the founding of the World Health Organization (WHO). Since 1950, WHD has been celebrated on the 7th of April annually. Each year a theme is selected for World Health Day that highlights a priority area of concern for WHO. WHD is a worldwide opportunity to focus on key public health issues that affect the international community.

2006: working together for health

2005: make every mother and child count

AMR has become a global concern but at same time it can be another challenge for our health practitioners to invent or discover something which can help in combating this. Alternate medicine or herbal medicines or any other traditional medicine and regular health care might keep us healthy from inside which is a strength for the body and resistance to many other diseases. It all depends upon how we learn from it and understand the impacts and start a healthy life which can keep us healthy for long. AMR has impact on the society too so it is important for us to know about it and have to look forward what best can be done for the safety of mankind in near future.

6 Aug 2009 - 3:45am | Daya Nath Singh
Mahatma Gandhi had expressed his clear view on the importance of ‘healthy work culture’ in the Harijan newspaper of 15th October, 1938, emphasizing on hard work by the people of the... 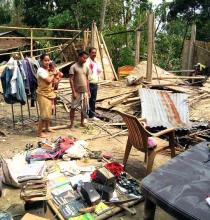