The new central executive committee of All Tai Ahom Students Union (ATASU) headed by Chao Pranjal Rajkonwar as President and Chao Moyur Borgohain as General Secretary along with 31 executive members took their oath and office on February 27. At a gorgeous function at the premises of the Royal Ahom Palace at Gargaon, the oath was administered by Chao Aswini Chetia, out-going President of ATASU. Many prominent Tai Ahom personalities like Dayananda Borgohain, Dilip Buragohain, Hemanta Kumar Gogoi, Debabrata Saikia, Arun Gogoi and Atul Phukan wished the new executive committee best wishes and expressed their views that the student community would be able the guide the society at the present critical moment of Assam. The new committee has adopted a twelve point agenda to carry out during their tenure which include demand for tribal status to Tai Ahoms, a Rs.200 crore project to protect monuments of Ahom kingdom, solve border disputes, compulsory teaching of history in primary and secondary schools, to name the proposed bridge at Dhola-Sadiya after Phra Cheng Mung, to declare a special economic package for development of Sadiya subdivision, right to oil and other natural resources to the state government, preserve the rain forest and ecology, name the Bogibil bridge after Chao Lung Siu KaPha, create Siu Ka Pha chair at Dibrugarh University and form a girls unit of the union.

No hoisting of tricolour in Bhelakhuti LP school

29 Jan 2017 - 11:59am | AT Staff Reporter
The students of Bhelakhuti LP school near Hattigarh in Udalguri district disappointed much finding no teachers in school on the day of India's 68th Republic Day recently as not a single teacher... 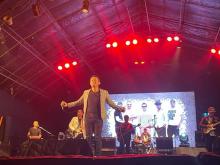