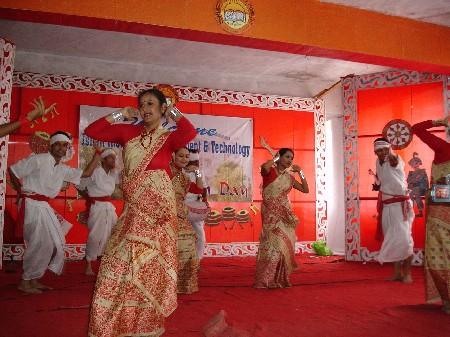 It is quite amazing that the participants are only a month old at the Institute where they have got admission for the PGDBM programmes. It was made possible by the senior students like Roopam Das and Barsha Mahanta who had coordinated the entire thing including arrangement of the costumes. The participants, Ajoy Dutta Medhi, Nilkamal Patowary, Nibir Barman, Pritom Goswami, Shankhali Bhattacharjee, Sushmit Kamal Malakar, Pravol Adholia, Priyanka Das, Priyanka Baruah, Jahnobi Sonowal, Begum Sakina Sultana left no stone unturned to represent their state in full colour and vibrancy.It was the major attraction of the day and was appreciated by one and all. With this kind of enthusiasm by the young boys and girls, we hope to see much more of Assam and its culture not only in other parts of the country but around the world too..

8 Oct 2015 - 8:55am | AT News
The Journalists’ Forum Assam (JFA) has condemned the killing of yet another scribe in Uttar Pradesh and demand a national action plan for justice to those journalists. In a statement, the...

2 Jan 2018 - 2:50pm | AT News
GUWAHATI:Nishamoni Deka, an accused ACS officer in the APSC scan has been sent to judicial custody on Tuesday after the end of police custody for the ACS officer involved in the APSC dcsm. After the...

Barak Valley
We need to contribute together for portraying Northeast India