Altogether 7 UNLF rebels were killed in a pre-dawn encounter with security forces in Manipur on Sunday. According to information, the encounter took place between a group of heavily armed militants and Assam Rifles jawans near village Sanapat in Imphal East district. An Assam Rifles column were launching a joint operation as they came under attack from the rebels armed with automatic weapons. This has forced the Assam Rifles jawans to retaliate leaving these rebels killed on the spot. A huge cache of explosives and weapons, including rifles, carbines, and small arms, was recovered from their possession. 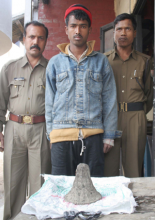 12 Sep 2012 - 4:19pm | editor
Delhi police have arrested a youth accusing him along with three of his associates of gang raping a girl from Assam. The 16-year-old girl was allegedly confined at a house in Khyala in west Delhi...

23 Mar 2018 - 12:10pm | AT News
GUWAHATI: Guwahati, the gateway to the north eastern region has become a safe route for gold smuggling these days. Security forces attached to the Northeast Frontier Railway seized twelve pieces of...