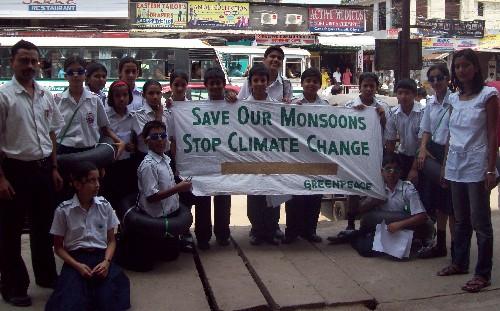 Students from various schools and other concerned individuals along with Greenpeace, a global environmental organisation raised alarm about the increasing threat of climate change on the Indian monsoon through interaction with the public at different locations spread over a week. The week long activity, which started off on 5th June, a first of its kind, involved engaging with people to sign petitions demanding a Renewable Energy Law from the newly reinstated Indian government.

The Indian monsoon which is the lifeline of the subcontinent will be significantly affected by climate change, according to a Greenpeace paper titled ‘Monsoon Wager: Climate change and the Indian Monsoon’, that was released on the eve of World Environment Day. The lives of millions of Indians, farmers, city dwellers, depend on the monsoon. Guwahati and India cannot allow the delicate balance of the monsoon to be thrown awry; we cannot afford to adapt to climate change, we simply have to take steps to stop it from happening”, said Prarthana Banikya, activist from Greenpeace.
On one of the activity days, Mr. Jitu Sonowal, a noted singer of Assam took an active part in the event and encouraged the children for participating in this noteworthy venture. He also regaled the audience with an impromptu song on the environment. The response of the public about the event was overwhelming. Expressing happiness, Bhaskar Dutta Goswami, an eminent entrepreneur of Guwahati said, “We are very glad that this awareness is being created. Climate change is a huge problem today and we all need to fight this together.” Many passers by, who had no time to spare and were hurrying to their respective destinations, were not only convinced to demand for a Renewable Energy Law but also enquired whether they could help out in any other way.

The public engagement activity took place in seven different locations across the city, namely, Dona Planet, Hub, Ganeshguri, Zoo Road Tiniali, Chandmari, Ambari, Panbazar. Students of South Point, Faculty School, Army School, Gurukul, The Sankriti were in the forefront engaging with the public on the issue. The enthusiasm of these young climate activists was infectious. Piyush Singhania, a Greenpeace activist and a student of Faculty School said, This is our environment and its calling for help. If we don’t protect it today, it might be too late! We want to tell the people of Guwahati that a Renewable Energy Law is the solution to this problem.”
Dapoon Rai Dewan, an animator from Bangalore and an active part of this event said that the purpose of this endeavour was to spread the word on how climate change is impacting our monsoons. The costumes that we wear today, tubes and swimming goggles symbolizes what it will look like when floods hit in the future.”

When asked on what their next steps of action would be, Prarthana Banikya said, “We will be meeting MP’s and urging them to support renewable energy. We cannot do this alone, which I why it is essential that our leaders help protect our environment and secure our future as well as the planet’s.”

Permalink Submitted by Rahul deka on Thu, 25/06/2009 - 05:53
What we can do is a small commitment for the climate. we can not bring and make any change as the politics of climate is beyond the reach of any ordinary persons.there are business associated with climate change so many will take profit out of that and the true loosers from all perspectives will be the ordinary people. people who are campainging to combat climate change must tell whether they are honest or not? its time for us to ask ourselves in what way we are using our resources? whatz my lifestyle and how its affecting the climate? simple and small solutions will help us in bringing a big change, its time to act but not to ask others to act but to lead from the front and show others that we are committed for the climate. There are many players associated with climate change things so its important to reach out to them in a strategic way. the governamnet of Assam must declare its climate policy. Its good to know that Governemnt of India has published its stand related to claimte change before the COP 15 to be held at Copenhagen later this year.

31 Jul 2016 - 10:23am | AT News
Patriotic People’s Front Assam (PPFA) welcomes the decision of Ludhiana girl Jhanvi Behal to hoist the national flag at Lal Chowk of Srinagar in J&K, where the Tri-colour was insulted in various...