The smoke-free policies in India were enforced since 2 October 2008 and different states are at varying levels of its implementation, yet the tobacco cessation services are still limited to very few clinics in India.

A lead article published in The Economist (7-13 March 2009) says: "tobacco is more addictive than virtually all of them [narcotic drugs]."

With tobacco being highly addictive, it is clear that for a successful implementation of the smoke-free policies, the scaling up of high-quality and reliable tobacco cessation services can no longer be ignored.

"Large areas in central and north-east India have more than 65 per cent tobacco use" said Dr Pratima Murthy, who is the Professor of Psychiatry and Chief, De-addiction centre, National Institute of Mental Health and Neuro-Sciences, Bangalore, Karnataka, India. She was speaking at the 14th World Conference on Tobacco or Health (WCTOH) which recently concluded in Mumbai (India). About 57 per cent men and 19 per cent women in rural areas use tobacco, both these figures are far more than the percentage of men and women who use tobacco in urban areas. Incidentally, most of the tobacco cessation services in India, are confined to urban areas. It is vital to expand tobacco cessation services in rural areas as well.

With support from the World Health Organization (WHO) and Ministry of Health and Family Welfare, Government of India, in the year 2002, thirteen tobacco cessation clinics (TCC) were established across the country in primarily cancer, psychiatry, surgical, cardiology and some non-governmental organization settings. These include the TCCs at the Chhatrapati Shahuji Maharaj Medical University (upgraded King George's Medical College) in Lucknow, Tata Memorial Hospital in Mumbai, and such premier healthcare institutes in India. Five more TCCs were added in the year 2005 at each of the regional cancer centres in India. Apart from delivering high quality and reliable tobacco cessation services, these TCCs were also mandated to develop intervention model for tobacco cessation for both smoking and smokeless tobacco users.

Each of these TCCs was well equipped with regular and uninterrupted drug supply, equipments like the CO monitor, and a well-trained staff in tobacco cessation. Over the past years, step-wise effective strategies for tobacco cessation evolved in these TCCs apart from providing tips to quit, behavioural counseling and pharmacotherapy.

Majority of those seeking help to quit tobacco didn't receive drugs - rather behavioural therapies, education, tips to quit, motivation to change and relapse prevention counseling were deemed most appropriate for 69 per cent tobacco quitters. About 31.1 per cent of those who registered for quitting tobacco, had successfully get rid of the deadly addiction. About 49.5 per cent of them had significantly improved by reducing the tobacco intake by over 50 per cent (compared to their baseline data). Only 8.7 per cent of those registered reported no change of tobacco cessation therapies on their addiction.

Dr Murthy outlines some limitations of the tobacco cessation programme in India. She says, very small number of population is covered by these TCCs in India. Most of these clinics are predominantly urban based and follow-up is variable in different TCCs. She also highlights another limitation that the use of tobacco quitting services is very limited among young people who are in varying stages of initiation.


(The author is a World Health Organization (WHO) Director General’s WNTD Awardee (2008) and can be contacted at: bobbyramakant@yahoo.com)

24 May 2017 - 7:55am | AT News
Indian Air Force jawans are fanning in a huge area covering Assam and Arunachal Pradesh in search of the Sukhoi jet fighter which has been remaining traceless for the last 24 hours. Apart from AIF,... 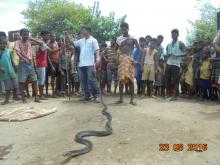 24 Aug 2016 - 9:02pm | Rituraj Phukan
A King Cobra measuring about 12 feet was rescued after it wandered into a residence at No. 2 Line, Jiajuri, Nagaon on Wednesday. Green Guard Nature Organization rescue specialist Dulu Bora was...