Pan-Indian recognition to Lachit Barphukan in 1999 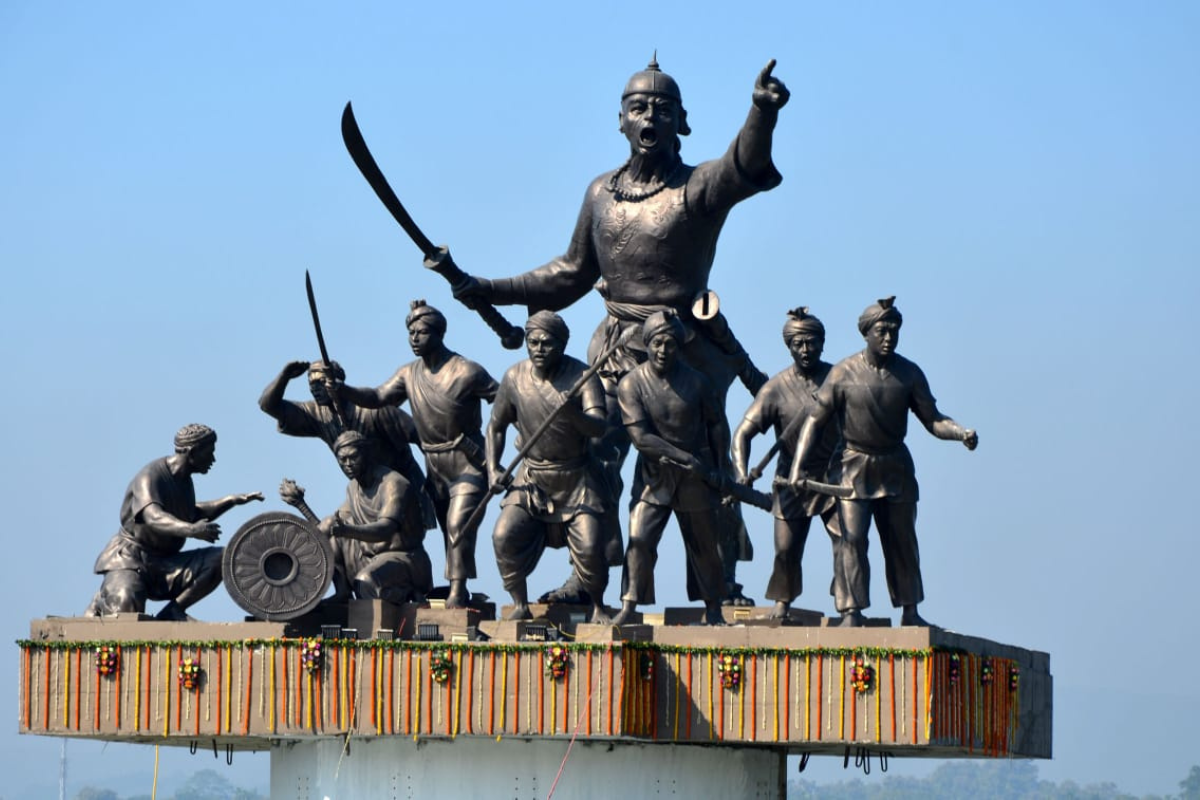 It is a matter of great pride for the people of Assam that, after centuries of contempt, India government has acknowledged Lachit Barphukan's great leadership by announcing the best cadet award in his name and the establishment of his statue at the iconic National Defence Academy. The credit for this achievement goes to a few Assamese intellectuals and scholars who have made this possible through their relentless pursuits for several years. It is an appropriate occasion to reflect on a rare Assamese success in projecting the glory of Assam at pan-Indian level, due to the selfless services of those individuals who never got their due recognition.

In 1960s, a few leading intellectuals under the able leadership and guidance of renowned literateur and heritage scholars from the Awahon-Ramdhenu Era Prof Bhabananda Deka took the first steps to establish the presence of Assamese identity at the official level in Delhi. Prof Deka, a senior officer in the central government of India at that time and through his authority, initiated the processes of establishing Assamese departments in the Union Public Service Commission and Delhi University.  That was first historic official success in bringing Assamese language and literature to the national mainstream discourse. He also authored an English language book on the history of Assamese language and literature and persuaded two former Presidents and two former Prime Ministers of India to write forewords in that book. He successfully organised a programme in Delhi on 24 November 1968 in the presence of then President of India Dr Zakir Hussain and Prime Minister Indira Gandhi, now ex-President Fakhruddin Ali Ahmed and ex-PM Morarji Desai, where President Hussain officially launched the book. This glorious past gave impetus to establish two think tanks namely Assam Foundation-India and Srimanta Sankardev Antarjatik Pratisthan to project Assam’s heritage worldwide. Under these platforms first film on Sankardev was made and globally premiered in Atlantic City and Somerset in the USA and English prose translation and publication of Sankardev’s timeless classic Kirtan Ghosa was successfully accomplished. A programme was also planned in India’s capital on the heroics of Lachit Barphukan under Assam Foundation-India.

Accordingly, the programme on Lachit in Delhi was arranged on 24th April 1999. Vice President of India Dr Krishna Kant, India Army chief General VP Malik, India’s home secretary Dr BP Singh, apart from Assam Governor, Chief Minister, Speaker and Leader of Opposition, extended invitations to the meeting. Indian History Congress president Dr HK Barpujari also supported the idea. VP Dr Kant and army chief Malik consulted with Prof Bhabananda Deka to learn more about the war strategy and leadership qualities of Lachit. Finally, the meet was successfully held at the Nehru Memorial Museum and Library with all leading invitees in attendance. Vice-President Dr Kant formally acknowledged that Lachit Barphukan is not only an Assamese but a top Indian army general of the same standing as that of Shivaji and Rana Pratap. General Malik declared in the same meeting that he was so impressed by the war tactics and leadership provided by Lachit Barphukan that his statue would be erected at the entrance of National Defence Academy campus and every year Lachit Barphukan Award will be given to top cadets from the Academy. Assam Governor, Chief Minister and other dignitaries offered their gratitude to the Army Chief for extending honour to Lachit by the Indian government.

The Hindu published the news with the heading "Heroic deeds of Barphukan recalled’.

The Assam Tribune Delhi Staff Correspondent reported under the heading "Heroic feats of Lachit recalled" on the front page of the 25th April 1999 issue:

“A lecture on the life and times of Lachit Barphukan organised by Assam Foundation involving leading political figures, historians, bureaucrats and Army officers today sought to place the great Ahom general at the centre stage by bringing out his feats and deeds of brevity out of Assam. Chief of the Army Staff VP Malik, who was present at the lecture today perhaps to remove the shortcomings of historians, agreeing in principle, had instituted a Lachit Barphukan prize at the National Defence Academy. The move, it was felt, will promote awareness about Lachit among the officers of the Defence services and inspire them to emulate his great example. Earlier, the function was inaugurated by Vice President Krishna Kant, who said that the leadership of Barphukan as a Ahom General was a great watershed in the political history of Assam. Addressing the function, Union Home Secretary B P Singh said that whenever great politicians, military leaders and patriots meet, a great event happens of which the country saw glimpses in Lachit’s life.“

Thus, Indian media rightfully highlighted and kept the records for posterity about the outstanding success of first pan-Indian level programme on Lachit Barphukan organised by Principal Bhabananda Deka founded think tank Assam Foundation-India and introduction of Lachit Barphukan Award at NDA and establishment of his statue inside the NDA campus as a fallout of the effort put in by the Assamese scholar and his associates. As other intellectual and artistic aspects of Assamese language, literature and art forms are also being gradually presented before the international community in the recent couple of decades, this momentum should be maintained and entire Assamese nation should be rejuvenated to support such initiatives both by the government and private enterprises. That will usher in an era of renaissance in Assam in the years ahead and take the state to a prominent place in the global arena.

1 Jun 2014 - 6:58am | AT News
RASHMITA GOGOI FROM NEW DELHIThe Centre is seriously considering to revive the talks with ULFA and other insurgent outfits who have already come back to the national mainstream. Top level home...

Let up in Guwahati waterlogging

14 Jun 2017 - 10:36am | AT News
Rain waters start receding in Guwahati on Wednesday twenty four hours after heavydownpour wreaked huge havoc in the premier north eastern city where two persons were killed. Barring the...

14 Sep 2018 - 9:09pm | Nikhil Mundra
HOJAI:- Hindi Divas celebrated at Hojai Girls College with a great enthusiasm on Friday. In this connection a meeting was organised by the Hindi Department of the College which was chaired by...